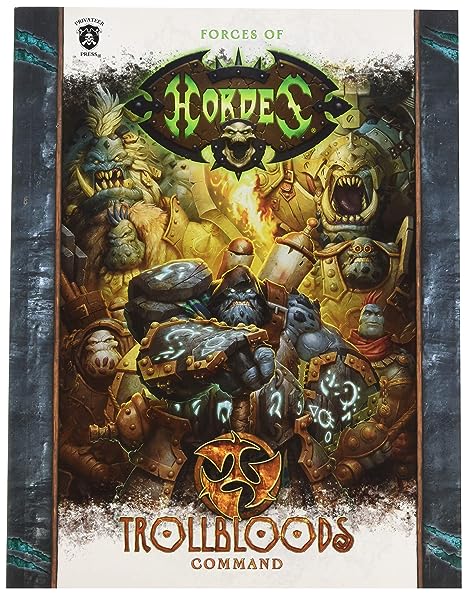 Leto is no longer on the throne, Feora has finally waxed her upper lip, and the United Kriels have taken up residence in the Alchiere subcontinent. First up, that cover is freaking gorgeous.

Fear not though, the gaps are filled. Madrak is still very much a Leader Among Trollkin, but Grissel Bloodson, as Marshal of the Kriels, pretty much calls all the shots for the army as the displaced Trollkin establish their new domain. Meanwhile, the Northern tribes — the appropriately named Northkin — are still way up there fighting off Khadorans and Dragonspawn alike.

While there are still scattered kriels throughout the Iron Kingdoms, the Trollkin have somewhat centralized themselves in two areas, each with its own threats and hazards and potentially hostile neighbours.

In covering the fighting forces of the Trollbloods, both the Traditional and the Modern are addressed and, as we flick through the book we can deduce which theme books the Trollbloods will be getting. The Command book provides all of the Warlocks and Warbeasts of the faction, but when it comes to units and solos, horde, conspicuously absent are the modernized troops — Sluggers, Pygs, Scattergunners, the War Wagon book and the Northkin.

The first is the Power Hodes Dhunia, trollbloo together the shamans and scribes to make a magic-centric army that, yes, allows unlimited units of Runeshapers, but also helps you load up on Whelps to feed your warbeasts, and demonstrates the connection the shamans have with Dhunia and through that connection with their full-blood Troll brethren, increasing the frenzy threshold of every warbeast.

The other is the Band of Heroes. With a little extra deployment zone to help the infantry of the kriels to fit all of those medium bases in, this is the traditional army of Kriel Warriors, Champions and the like that have been the backbone of their people for centuries.

Having an army where every single warrior model ignores Tough is a thing as well…. Aside from having some glorious new art for some of the existing model entries, the Trollbloods command book introduces us to Madrak, Great Chieftain, and the Sea King. There was a lot of speculation as to what would happen to Madrak after the events of the Battle of Bloodstone where Kromac laid claim to Rathrok.

Now he wades into battle with Shield of Volarr and a brace of dirty great spears. Armed with an anchor on a chain, the Sea King also hits harder than its landbound brethren, and — AND!

After the model entries comes the official model gallery, and then something special. Not only does the painting guide provide instruction and recipes for the studio scheme it also offers options from some of the most popular alternate schemes. Each example is provided with a coloured trollblold drawing of the model with breakdowns for base, shade and highlight for each section, and also a photo of a completed model. For the Trollbloods we have the studio scheme, an alternate grey-brown skinned scheme for the Bloodstone kriels, and then a third scheme for those who looked at yrollblood Dire Trolls and immediately thought of a rather well-known angry green dude from Marvel comics.

I love — LOVE — that Privateer is stepping further into encouraging personal creativity in personalizing our armies.

I highly recommend nabbing it, and am pretty darn pleased to add it to my library. This site uses Akismet to reduce spam. Learn how your comment data is processed. This be ye new blogge. Here be ye olde blogge. Trollbloods Command Book Posted on December 23, 7: THEME FORCES The first is the Power Of Dhunia, drawing together the shamans and scribes to make a magic-centric army that, yes, allows unlimited units of Runeshapers, but also helps you load up on Whelps to feed your warbeasts, and demonstrates the connection the shamans have with Dhunia and through that connection with their full-blood Troll brethren, increasing the frenzy threshold of every warbeast.

Leave a Reply Cancel reply. The LH Locker This be ye new blogge.